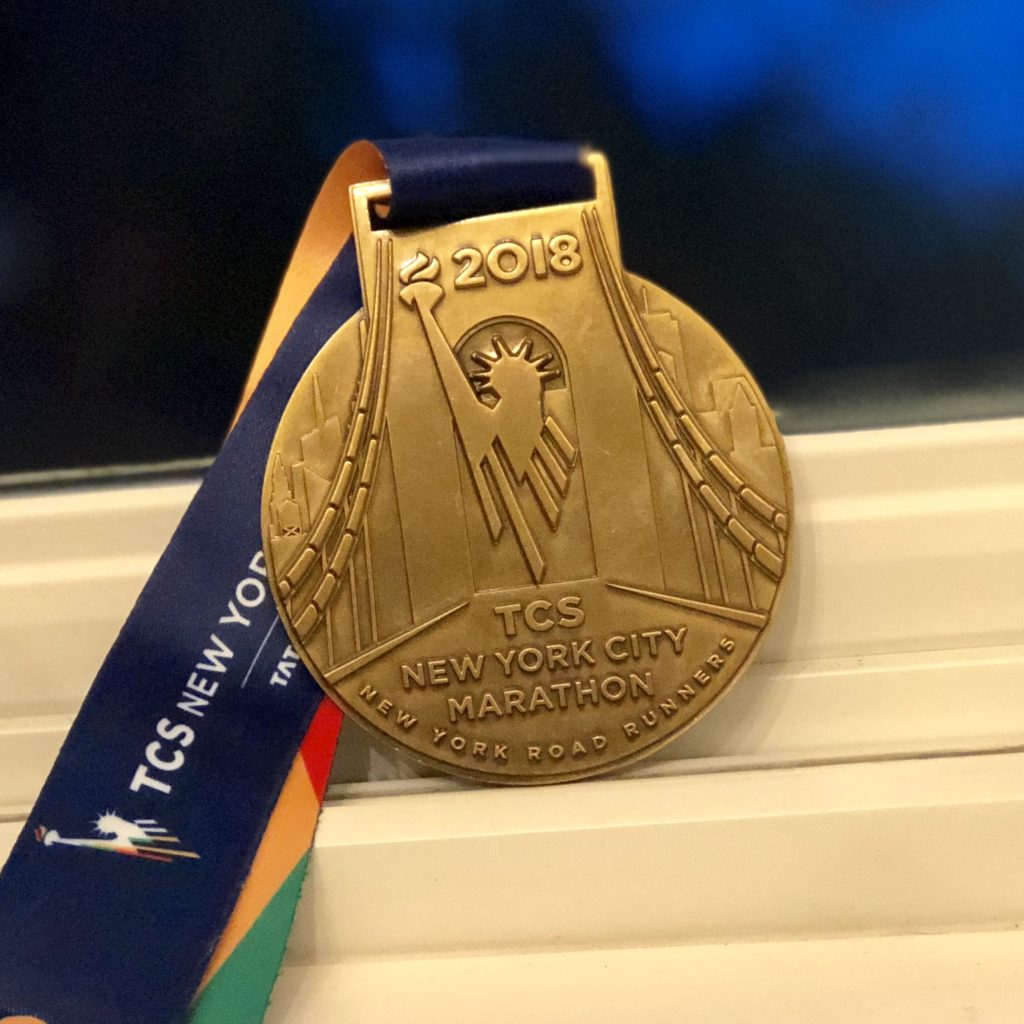 A little less than a year ago, on December 2, 2017, I ran my first marathon in Rehoboth Beach, Delaware. Shortly after the race I was asked the infamous question – “Are you going to run another one?” Right then and there, I honestly didn’t know how to respond. I had spent 18 weeks training, and encountered physical and emotional challenges throughout. All I knew was I wanted to take a break. So, I answered, “We’ll see,” and then I went on to enjoy the festivities of the season.

It wasn’t until the beginning of summer I had a strong urge to run another marathon. My internal dilemma shifted from whether I wanted to run the 26.2 miles again to where I wanted to run them. Having lived less than a marathon’s distance from New York City for most of my life, the TCS New York City Marathon was at the top of my list. The issue was getting into the marathon isn’t easy.

How to Run the TCS New York City Marathon

Most individuals who want to run have four options to get in:

Although I didn’t tell anyone at the time, I submitted an application for the race lottery in February, but I wasn’t selected.

While this New York Road Runners (NYRR) program guarantees entry, I wouldn’t have been able to run in 2018. The program requires a person to run nine NYRR races and volunteer for one to get guaranteed entry for the following year.

This is a great way to get guaranteed entry and give back to a meaningful cause. Most charities require runners to fundraise at least $3,000. In 2015, I ran for the American Cancer Society in order to participate in the NYRR New York City Half Marathon. If I didn’t have a unique fifth option available, I would have run for charity.

I am an active member of the Rockland Road Runners (RRR). As an affiliated club of NYRR, RRR received four entries to the marathon. I applied for one of the entries and was selected to represent the club. It was an honor and a reason to train to run a PR.

I followed the NYRR Conservative 16-Week Marathon Training Plan. I modified the plan to run three days per week most weeks and four days per week some weeks. I modified the plan because I didn’t feel like I was in shape to dive right into a rigid marathon training routine; I was injured in the spring and had only recently started running again. While this was a very conservative approach, my goal was to run the race healthily having no injuries or pain going into it. I wanted to feel good and be strong without subconsciously worrying about a muscle pain.

A key difference in my training this time around was speed. This plan had weekly speed or hill workouts, which noticeably made me faster week after week. By the end of my training, I was running close to my 5K PR after having run several miles before the short distance; I attribute my ability to have done that to the speed workouts.

The marathon begins on the Staten Island side of the Verrazano-Narrows Bridge. RRR organized a bus to transport locals to the start line. The bus left at 5:40am sharp. I had been up since 2:30am, though I still had a solid night’s sleep thanks to Daylight Savings Time ending. After a two-hour bus ride, I spent two and a half hours waiting in the runners village at Fort Wadsworth. I was awake for almost eight hours before the gun sounded for Wave 2’s start at 10:15am.

My breakfast consisted of an everything bagel with nothing on it, which I ate on the bus, and a Cliff Bar, which I ate about an hour before my start time. Before the Rehoboth Beach marathon, I only ate a Cliff Bar. Though, I knew that wouldn’t fly in New York since I had to get up so early to get to the race. More fuel played in my favor and IF (keyword IF) I ever run another marathon I will opt for the larger breakfast again.

Now to one of my favorite parts of the race – when I finally started the five borough journey. The weather was perfect: high 40s and sunny. The Verrazano-Narrows Bridge is beautiful. While everyone may not agree with this statement, everyone hasn’t experienced it as I did. I was lucky to be assigned to start on the upper level. It was the one part of the race when I wish I had my cell phone so I could make that moment into something tangible. So many runners who carried their cell phones hopped onto the divider and took a selfie with 52,000 runners and the iconic skyline in the background. I sang along to Frank Sinatra and Tony Bennett’s New York, New York duet as I crossed into Brooklyn.

I ran my fastest miles in Brooklyn, averaging an 8:41 pace for the first half. The crowd got me through these miles. Whenever it seemed like the crowd was dwindling, I turned a corner and a new crowd appeared cheering for everyone. It didn’t matter who you were or where you were from. In a way, the world unites at the New York City Marathon. I ran aside people from Sweden, Mexico, France, Germany, Japan, and so many more countries.

In Queens, I slowed my pace a bit, but I was still feeling strong. It wasn’t until the 59th Street Bridge crossing into Manhattan that I started to feel like I was running a marathon. The reason why this was one of my least favorite parts of the race is the course goes from having a crowd to no crowd. There were two FDNY officers at the center of the bridge, blasting music from their ambulance as loud as they could; I thanked them for that. Otherwise, it was just me and thousands of other runners breathing and taking steps toward Manhattan in silence. Also, this bridge, like all bridges, is a hill. A hill at mile 15 of a marathon is always a challenge.

Once I entered Manhattan, I got some adrenaline. The crowd was back and I knew I would pass family along my way. I spotted my husband, Jonathan at mile 18 where I ran an 8:29 mile, which tied my fastest mile of the race. (I also ran 8:29 at mile 7.) I kept a positive attitude, remembering that at this point during the Rehoboth Beach marathon the previous year was when I started to break down; I didn’t want that to happen again. Plus, I was on pace for a sub-four hour marathon, which wasn’t my goal, but was achievable at that moment. I kept running and before I knew it I was crossing the Willis Avenue Bridge into the Bronx.

The Bronx is where I hit the wall. I had been developing a pain in my lower back that got progressively worse to the point that I felt if I kept running I was going to tweak a muscle and I wouldn’t be able to continue running. I walked through the water stop between mile 20 and mile 21 to hydrate and gave my back a break. I ran that mile in 9:34, which was still on pace, considering. Yet my back pain wasn’t going away and upon starting mile 22 I broke into tears.

I can’t tell you exactly why I began to cry. Reflecting on that moment, I was in a fragile state, both physically and emotionally. I allowed my entire focus to be on pain – a mental weakness that inevitably took away a sub-four hour finish. I walked for a good part of miles 22, 23 and 24, only running whenever I found enough energy from deep down inside.

It was a long walk out of Central Park to the Starbucks on 86th and Columbus where I met Jonathan. On my walk, I passed Mike Nusblat, a fellow RRR member who finished shortly before I did. We congratulated each other, and then I kept waddling along. I was feeling down for a good part of that walk because the pain returned to my lower back and to my legs and feet. I didn’t want to end my New York experience on a sore note. I told myself that although I was in pain, I had achieved what I had set out to do. I ran the race healthily. Despite some pain, I was not injured. I finished strong, positively representing RRR at the finish. And despite taking a conservative approach to training, I crushed my first marathon time in the greatest city in the world.

Running marathons has taught me a lot. I’ve learned to be confident, believing in myself to achieve a goal that I never thought I would. I’ve learned that when I put in hard work I reap the reward. Plus, I’ve learned running is as much a group sport as an individual one. Every runner has a goal, but we can help each other to achieve our goals through a simple clap or cheer or word of encouragement.

Though, there’s something about the marathon I haven’t quite figured out. It broke me at mile 20 in Rehoboth Beach and mile 22 in New York City. So, there’s still a lot for me to learn and IF (keyword IF) I run another marathon, I hope that I will figure out how to conquer the wall.