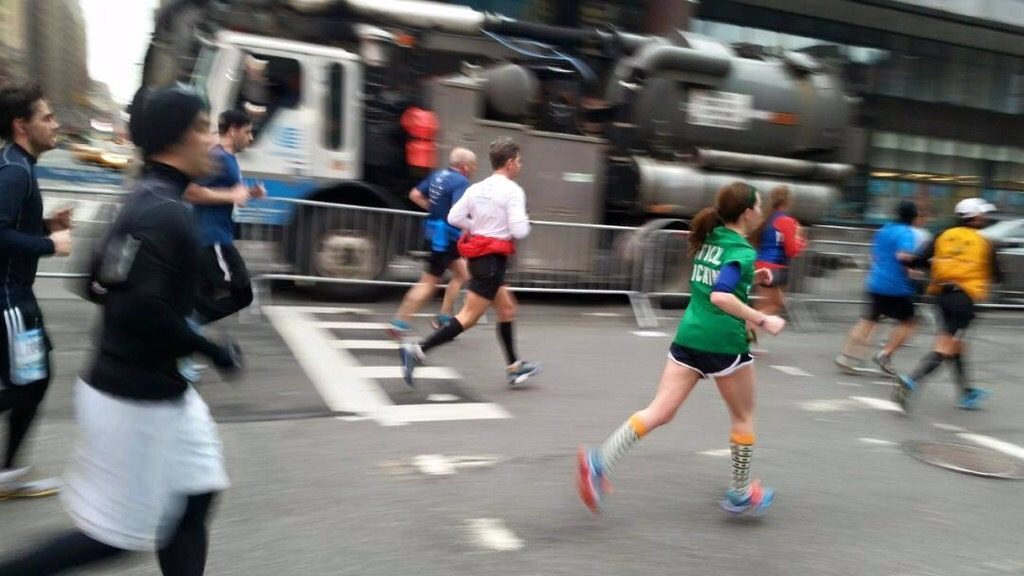 I had the post-race blues.

I ran my first half marathon in Philadelphia on the Sunday before Thanksgiving. The time after the race was the perfect time to take a break. After 12 weeks of training, I earned it. Plus, holiday parties, foods and drinks helped distance my interest from running.

I enjoyed the time off. However, after only a couple of weeks, I found it challenging to run seven miles consecutively. At that moment, I decided it was time to register for my next race.

I am a suburban woman, born and raised in Rockland County, New York. Living about 20 miles north of Manhattan, I had visited the city more than once or twice. With the exception of the George Wodicka Hook Half Marathon, the New York City Half Marathon was the closest race I had to a hometown race. After running Philadelphia, I wanted to have a similar running experience at home. The New York City Half Marathon was my opportunity to see the city in a way I hadn’t seen it before: no taxi-filled streets, just runners.

The race, hosted by New York Road Runners, had a lottery system. I wasn’t selected. My lack of luck made me even more determined; yet, I didn’t have many options. Either, I could try to buy a bib from another runner, which is banned by New York Road Runners, or I could run for a charity. I listened to the good angel on my shoulder and committed to run and fundraise $1,000 for the American Cancer Society. Not only would I run the race, but also I would raise awareness and remember my aunt and godmother, Monica McNamara, and my nanny, two incredible women who battled cancer more than one time.

I followed Hal Higdon’s Intermediate Half Marathon training program. The plan was a step up from the plan I followed for Philly. I ran more miles each week. Plus, I had to do speed work on Wednesdays, alternating between increasing 400-meter repeats and tempo runs.

Unlike my training for Philly, I completed the majority of my runs on the treadmill. Each week I ran inside four out of five of my running days. The amount of snow my town got during the winter made it impossible to run outside on some days. Although there was probably a means to run outside more frequently, I learned how I benefited from treadmill running. I flew the second I stepped foot outside! I tended to run slower than average on the treadmill. Yet, the second I ran outside I was able to break free from the treadmill’s constraints.

Also, the training experience taught me to listen to my body. In February, I faced a cold and a couple of pains that impacted my physical abilities. I learned that I wasn’t superwoman and that giving my body a break when it had fallen weak would help my training more than hinder it.

My good friend Marie from Baltimore came up to run the race. Prior to her training for the race, her longest distance was 3.1 miles. I was so happy she was with me, even though we had separate corral assignments. We spent the morning together sporting our matching shamrock socks that we had purchased at the expo the day before. About 15 minutes before the gun went off, we parted ways. Next thing I knew, I was running in Central Park.

I had a goal time: beat my Philly time of 1:56:45. My fiancé Jonathan told me that New York City was a personal record (PR) course. The race began with the ups and downs of Central Park, including Harlem Hill, but transitioned to flat grounds and the slight downhill of the West Side Highway. Once I entered Times Square, which is the reason why so many people partake in the race, I knew the hardest part was behind me. I knew I just had to maintain a consistent pace in order to obtain my goal.

I finished in 1:52:30! Sure, the course layout was spot-on for a PR. Although, I knew the speed work I did in training got me in shape to beat my first half marathon time by four minutes and 15 seconds. Also, my family’s spirit was present. I saw my parents, brother Dennis, future sister-in-law Stacey and Uncle Roy in Times Square. Everyone, plus Jonathan and my brother Kevin, met me at the finish line. And, I ran with my Aunt Monica’s prayer card pinned to my shirt; she was with me the entire time.

I knew I could officially call myself a distance runner because I wasn’t all that sore. Marie and I enjoyed a celebratory beer after the race at my Aunt Helen’s annual St. Patrick’s Day party. Afterwards, we went back to my apartment to watch the race on TV; Jonathan had recorded it. It was a good thing that he did because we learned one of our pre-race pictures was displayed! We got to witness our five seconds of fame on ABC7 News!

Also, I surpassed my fundraising goal. Thanks to the generous support of my family and friends, I raised over $1,180.00 to support the American Cancer Society’s mission to create a world with more birthdays and less cancer.

One week later, I already feel the post-race blues. Jonathan is doing his race predictor for the Boston Marathon, the West Point Half Marathon, next weekend. I may join him, weather permitting. It’s his time to shine, so if I run I’ll take it easy. If I run, it’ll be the first half marathon that I run just for fun!

Have you completed a half or full marathon? Share your experience in the comments section. 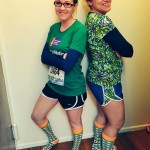 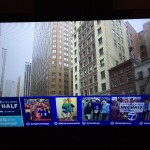 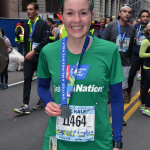 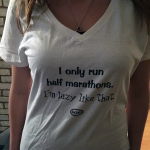