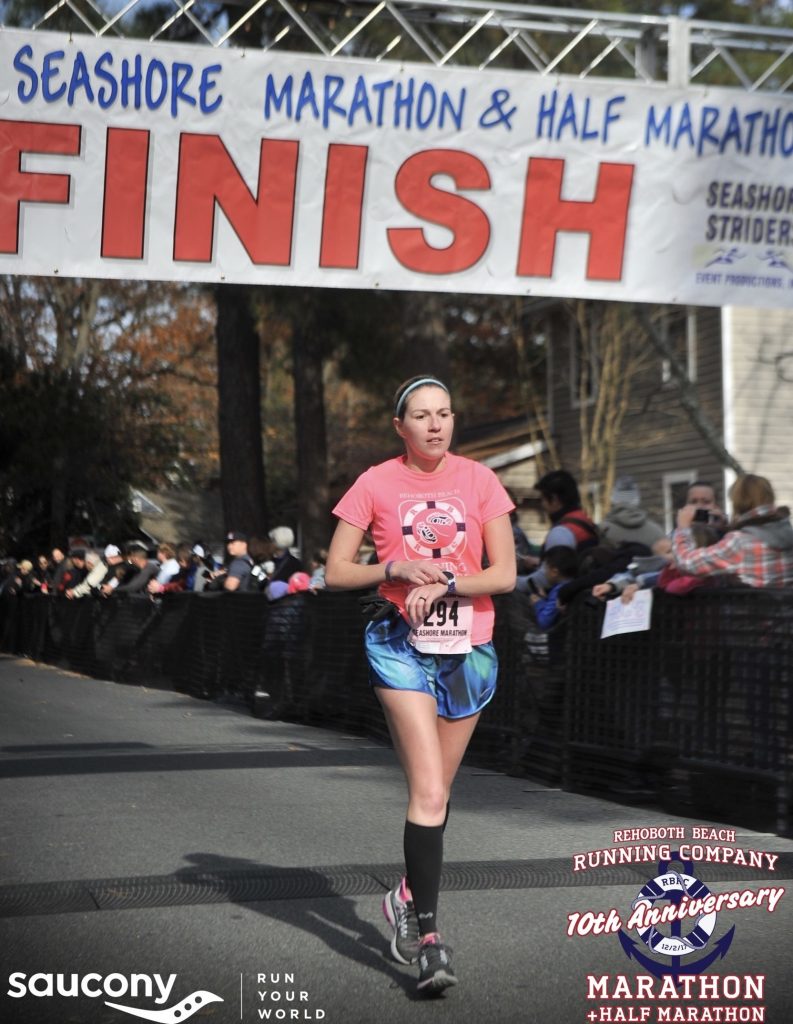 On one not-so-sober night in July, I registered for my first marathon: the Rehoboth Beach Marathon in Delaware.

As much as I joke, my road to the marathon has been a long time coming. Prior to registering, I had run 8 half marathons over a 3 and a half year period. My husband, Jonathan is a marathoner (who is on a quest to conquer the 50 states) and is the person who inspired me to start running that distance. (You could call him my bad influence.) Also, through my involvement in the Rockland Road Runners, I interact with marathoners regularly. It was time for me to “join the club”.

I’ve run races of all sizes, from the New York City Half Marathon, which comprises more than 20,000 runners, to local 5Ks, which have had fewer than 50 participants. In my experience, there’s less of a chance of running shoulder-to-shoulder for miles on end when you’re in a small race, especially in a small town like Rehoboth Beach. This marathon caps at about 1,000 runners, which was right up my alley.

Another reason why this race was attractive is I have family who live in the area. While I had visited for typical family gatherings (weddings and funerals), I didn’t really know the place. Rehoboth was a destination that I could explore and treat like a mini vacation, but also where I could see family that I don’t get to see very often.

Plus, there’s no where in the world like the beach. Even in December, I would be running in my happy place.

I followed an 18-week Nike training plan that had me running 3-4 times per week and doing strength workouts 2 times per week. The beauty of this plan is it wasn’t overwhelming.

I couldn’t have asked for better weather either. Training started on July 31. Although there were some hot summer days, it was autumn by the time I started running long (warm days, but cool mornings). I only had to use the treadmill once, and I only ran in the rain a handful of times. The roads of Township of Washington, the trails at the local Duck Pond, and the loop at Rockland Lake were my home.

Nonetheless, I would be lying if I didn’t encounter challenges on my road to Rehoboth Beach. On August 26 (week 4), I took a spill while running. Thankfully, I only sustained minor scrapes and bruises. Looking back, that fall foreshadowed more challenges ahead.

On September 24 (week 9), I ran the Franklin Lakes Scenic Half Marathon. I had developed shin splints, but overall I finished well with a time of 1:49:24, which placed me second in my age group. Yet, that was the first day of the rest of my training that I would learn to run through the pain of shin splints; they never went away.

October was all about long runs. I ran two 16-mile runs and two 18-mile runs, alternating weekends throughout the month. On October 21 (week 12), I ran a 3 mile warm-up followed by the Superhero Halloween Half Marathon in 1:52:38. This was one of my least favorite runs simply because the heat got to me. It wasn’t an easy race by any means and I had to take a couple of walking breaks to get to the finish line.

A short three weeks later on November 11 (week 15), I ran my first and only 20 mile run before race day. Unlike the half marathon race, the morning of my 20-miler was the coldest day of 2017 to date. I prepared by wearing multiple layers and hand warmers, and conquered the training run at Rockland Lake in a time that seemed to be on track for a sub-4 hour marathon: a run time of 2:54:13 and an elapsed time of 3:02:51. I was confident, despite my ongoing shin splints and a newly sensed pain in my achilles.

As my taper period began, my confidence quickly turned to fear. The following weekend I could barely run 4 and a half miles of my assigned 14. All I could think about was the pain creeping in my achilles. I had learned to manage the discomfort of shin splints, but I found it much more difficult to manage this pain. I went home and cried, thinking to myself how hard I had worked up to that point, and how I didn’t want to fall short of the accomplishment of a marathon. With support from Jonathan and my running friends, I decided to rest and stretch with very little running between then and race day. I only ran two more times after that before the marathon, the last run being my 2-mile shakeout on the morning before the big day.

The Day Before the Marathon

On December 1, after we ran our shakeout run, Jonathan and I drove down to Rehoboth Beach. Butterflies were fluttering inside of me for most of the car ride. It felt great to arrive and check-in to our oceanview room at The Avenue Inn. The warm welcome we received from everyone, from the hotel staff to the volunteers at packet pick-up, helped me relax and chased those butterflies away.

We met my cousin, Kyle for dinner at Nicola Pizza, an establishment well-known by the locals and tourists alike. It had to have been close to a decade since I had seen Kyle, so we spent most of dinner catching up and reflecting on family memories we shared.

After dinner, Jonathan and I enjoyed complimentary fresh baked chocolate chip cookies that the hotel puts out every night. (Yes, just like the hotel serves complimentary wine and cheese for happy hour every day at 5:00pm; we were looking forward to that as our post-race celebration the next day!) Then, it was finally time for some much needed shuteye.

At 5:30am, the alarm clock buzzed and I awoke ready. Jonathan and I got dressed, ate breakfast, and then made our way to the start line. We wished each other luck, and before I knew it the shotgun went off at 7:00am on the dot.

I started with the 3:55 pace group. Having run the majority of my training alone, I was excited to run with others for the 26.2 miles. However, I found myself exerting a lot of energy to stay with the group, winding through the crowds of people participating in the full and half marathon races. At about mile 2, I went ahead of the group to find a more open space, and then settled into running an 8:45/8:50 pace through mile 17.

I really enjoyed those first 17 miles. The majority of the course was the trails of Delaware State Park. It was a beautiful morning (temperature in the high 40s) to run through the park with its scenic trees and ponds. At about mile 8, the course turned into a highway that led all of the runners to Lewes, which is another beach town in the area. Just before mile 10, I spotted Jonathan on the other side of the highway and waved to him wearing a big grin on my face. At mile 10, the course turned, and took me back on the trails heading back to Rehoboth.

But, oh, mile 17! Up until that point, the pains I was feeling during the prior weeks were subtle. The tension in my achilles become more apparent, so I took a quick walking break telling myself that in 30 seconds I would start to run again. I was successful with this run/walk method until about mile 20 when I officially hit the wall.

Despite the physical pain I was feeling, for me, the wall was all mental. At about mile 19, the course took me near the finish line where I was greeted with encouragement and even a smile from a familiar face, Wojtek, who is one of the Rockland Road Runners who participated in the half marathon. By mile 19 and a half, the crowds were gone and I became discouraged. The final 10K was another out-and-back path of the park. Something about running away from the finish line and away from the cheering into a secluded area broke me. I walked for at least 2 miles, watching the 3:55 pace group pass me at around mile 21. I continued running and then walking, and running and then more walking until my goal of finishing was in sight.

Running across the finish line was a highlight of this experience. At that moment, with 4:16:35 on the clock, I officially joined the marathon club. I earned the medal that was placed around my neck and that I would proudly wear for the rest of the day. I could honestly purchase a 26.2 sticker and flaunt it on the back window of my car. At that moment, I became a marathoner. As I write and reminisce on that moment, the pride is still present. This is a feeling that will last my entire lifetime.

Shortly after finishing, Jonathan and some of the Rockland Road Runners gang congratulated me, which brought tears to my eyes. Unlike the tears that came during my training, these were tears of joy.

Upon posting my medal picture on Facebook, the wise Will Carpenter, another Rockland Road Runner, commented, “As they say, the marathon is a 20 mile race followed by a 6 mile race.”

The marathon is the most enduring physical challenge I sought out and achieved. I truly believe one must run the marathon distance to understand how running is a mental sport. I learned a lot about myself and how I can improve my time if I choose to run the marathon again. And for that, well, we’ll just have to wait and see.